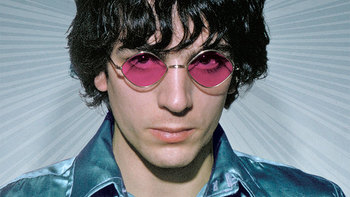 Shine On You Crazy Diamond!
"It's awfully considerate of you to think of me here
And I'm most obliged to you for making it clear
That I'm not here."
— "Jugband Blues", A Saucerful of Secrets
Advertisement:

Roger Keith "Syd" Barrett (6 January 1946 - 7 July 2006) was an English singer, songwriter, and musician best known as a co-founder of Pink Floyd, and the band's frontman in their psychedelic years. His solo work is also often seen as a prime example of Outsider Music.

With the band, Barrett recorded 3 singles and The Piper at the Gates of Dawn (writing nearly all the songs), but his mental health started to decline considerably as a result of excessive drug use, though many believe his breakdown would have happened anyway. He was subsequently forced to leave the band at the start of 1968 during the making of their second album A Saucerful of Secrets, and was replaced by David Gilmour. The rest of the band to this day feel extreme guilt for not being able to help him properly, though there was really very little they could do.

After his departure, Barrett would go on to creating two solo albums. The first, The Madcap Laughs, was marred by poor production at certain songs (the ones produced by former band-mates Roger Waters and David Gilmour), but the second, Barrett, came off better (this time produced by Gilmour and with contributions by Richard Wright). He gave only one performance in that era — with Gilmour on bass and Jerry Shirley from Humble Pie on drums — only to leave the stage after four songs. He did perform for the BBC twice, though, and those performances would eventually be officially released.

In January 1972, Barrett performed in a band called "The Last Minute Put Together Boogie Band" which would go onto form the band Stars with John "Twink" Alder note Who was in The Pretty Things just long enough to play on S.F. Sorrow on drums and Jack Monck on bass. Their performances ranged from brilliant to disastrous, and after reading a negative review the fragile Barrett quit immediately. The last time Barrett tried to record was in 1974, and that didn't go very well at all. After that, Barrett retired from the music industry for good.

Barrett would visit Pink Floyd one last time in 1975 — coincidentally, just as they were completing their tribute to him, "Shine On You Crazy Diamond" off of Wish You Were Here (1975). Upon revisiting them, his hair and eyebrows were shaved off and he had gained quite a bit of weight; this dramatically changed appearance

◊ and signs of further mental decline reduced Waters and Wright to tears. Apart from a brief encounter with Waters at Harrods a few years later, Barrett would never see the members of Pink Floyd again after that. Eventually, he moved in his mother's house and became a full-on recluse.

During this time, Barrett went back to using his original name Roger, was often annoyed by paparazzi and fans, approved an odds-and-ends compilation album called Opel which is now part of his official discography, and continued to receive royalties from Gilmour for his work with Pink Floyd, which he lived on. Time did little to diminish interest in his work, and although he had become a legendary figure, he simply wanted to be left alone.

Barrett's physical health started to decline in the 1990s due to diabetes and stomach ulcers, culminating in his death in 2006 from pancreatic cancer. The rest of Pink Floyd were naturally devastated, and others who cited Barrett as a major influence, such as David Bowie, also expressed sorrow. His work with Pink Floyd ensures his legacy, and Barrett remains fondly remembered to this day.

"What Exactly is a Dream?":

"And What Exactly is a Joke?"