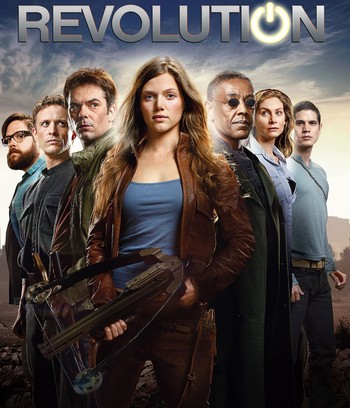 "We lived in an electric world. We relied on it for everything. And then the power went out. Everything stopped working. We weren't prepared. Fear and confusion led to panic. The lucky ones made it out of the cities. The government collapsed. Militias took over, controlling the food supply and stockpiling weapons. We still don't know why the power went out. But we're hopeful someone will come and light the way."
Advertisement:

Revolution is an NBC TV Series (written by Eric Kripke, directed by Jon Favreau, and produced by J. J. Abrams) that takes place in a post-apocalyptic future.

Fifteen years earlier, an unknown phenomenon permanently disabled all electricity-powered technology on the planet, ranging from computers and electronics to car engines, jet engines, and batteries. People were forced to adapt to a world without technology, and due to the collapse of public order, many areas are ruled by warlords and militias. The series focuses on the Matheson family, who possess an item that is the key to not only finding out what happened fifteen years ago, but also a possible way to reverse its effects. However, they must elude various enemy groups who want to possess that power for themselves.

The series premiered on September 17, 2012 and was ordered for a full first season after only three episodes. NBC ordered the second season on April 26, 2013. NBC cancelled the series on May 9, 2014.

In May and June 2015, a four-part digital comic book series wrapped up the story.

Rachel: It's my fault, dad. The bombs. I broke everything. ("Born in the U.S.A.")
Gene: When they brought you here! You opened your wrist! I had to feed you with...a damn spoon. ("Patriot Games")