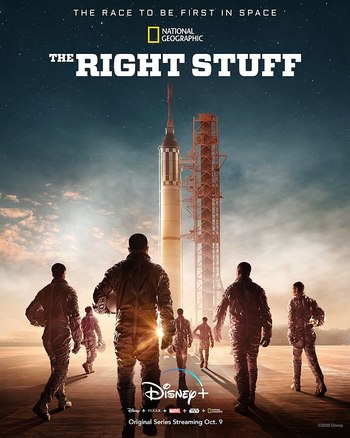 What does it take to be first?
Advertisement:

The Right Stuff is an eight-part limited series produced by National Geographic Channel and airing on Disney+. It is the second adaptation of Tom Wolfe's book of the same name, after the 1983 film. As with both the book and the movie, it follows the Mercury Seven astronauts as they and their families become instant celebrities during The Space Race.

Leonardo DiCaprio serves as an executive producer through Appian Way.

It debuted on Disney+ on October 9, 2020. Though Warner Bros. Television was interested in producing additional seasons, Disney+ cancelled the show in 2021, leading the studio to shop it to other outlets.