Western Animation / March of the Dinosaurs 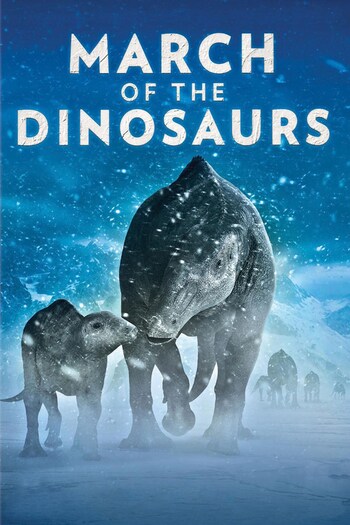 March of the Dinosaurs (2011) is a feature-length Speculative Documentary film made by ITV. It tells the story of two different dinosaur youngsters: Scar, a small Edmontosaurus trying to keep up with his herd on their long journey south; and Patch, a sub-adult Troodon who struggles to survive and find a mate in the freezing wilderness of the North Pole.

Its complete imagery has been created with the help of CGI, as opposed to many similar programs that use real-life environments and only CGI the animals. The film features no cut-away scenes or any talking heads, but instead (much like the famed Walking with Dinosaurs) focuses on telling a story through its visuals and narration provided by Stephen Fry. It can be seen as the first of a new generation of CGI dinosaur documentaries.

Due to the way it "humanizes" some of the dinosaurs, the program is also very similar to Discovery Channel's Dinosaur Planet and Dinosaur Revolution.

March of the Dinosaurs provide examples of the following tropes: