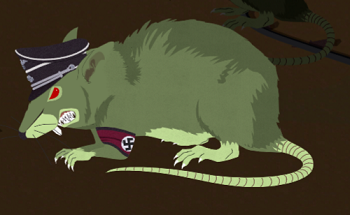 Close relatives of Always Chaotic Evil, these characters are defined morally and narratively by what they are, rather than what they do. Inevitably, the Villain by Default is a member of an organization or class that society as a whole has agreed is evil. For this reason, they require little to no additional characterization to cement their position in the story or motives, and in fact, most Villain by Default characters receive none. Much of the time having to show a Moral Event Horizon for those characters might seem redundant, given that they were obviously beyond it with their whole criminal lifestyle.

Essentially, this is a way to supply ready-made antagonists and Evil Minions without sacrificing screen time. Evil Minions, Dragon, and members of the Quirky Miniboss Squad are more dependent on this trope than the Big Bad, since the Big Bad usually has enough screen time to more clearly establish their motives.

Nazis and neo-Nazis are possibly the ultimate example of modern cinematic Villain by Default characters, since these need no additional characterization - most of society agrees Nazis were evil simply by being Nazis, and neo-Nazis are even more evil because they've willingly devoted themselves to a lifestyle the rest of the world considers evil (as opposed to the occasional Nazi who was forcefully conscripted).

Other common examples of Villain by Default types:

If the protagonist of the story is an Anti-Hero, such as a vigilante or mob boss, or is wrongly accused, then any form of law enforcement will be the antagonist. Whether this is because they are ineffective, corrupt, well-meaning-but-misinformed, or just in the protagonist's way depends on the specific story.

Naturally, whenever a group is cast as Villains By Default without additional justification, there will be a part of the audience that's going to disagree with the assessment. This is particularly true of works that are subtly or unsubtly pandering to one "fashionable" prejudice or another, or that are aimed at very specific audiences. This is where Values Dissonance will kick in: a work created by a fundamentalist Christian might have a "sinful" person (stripper, alcoholic, what-have-you) as an irredeemable villain, whereas a work by someone who despises Christians will want his/her audience to assume that Christians are the evil ones.

Contrast with Noble Profession, where a character is stereotypically good because of their career path. Contrast also with Lovable Rogue, a sympathetic (if not heroic) criminal character.

Demonization: Oftentimes a character's occupation is not inherently evil, but has been demonized by Hollywood. Some examples would be hunters (because they're bloodthirsty killers), land developers (who "rape the environment"), dogcatchers (who hunt down innocent animals and lock them up), lawyers (who prey on others' misfortune, and just because they're lawyers) or corporate CEOs (because they're money-hungry). And don't forget scientists (especially those dealing with anything nuclear or genetic), who're often depicted as Mad Scientists. Once demonized in the story, these ones are treated just as evil as a Nazi, terrorist, etc. For positions of Gods, the ones involving the Dead and Death almost inevitably get this treatment. Note that this has a postmodern effect, in that many people may now actually see such professions as wicked in and of themselves; on the other hand (and in all fairness), these tend to be professions that annoy people in the first place.