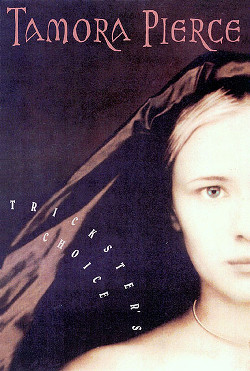 “Most humans think the appearance of quiet is quiet. They do not see that sometimes the enemy is as quiet as the serpent. Only when it has stolen all of their eggs will they know bad walks in the quiet as well as the noisy.”
Advertisement:

The Trickster's Duet is the fourth sub-series in Tamora Pierce's Tortall Universe. It follows Alianne (Aly), daughter of Sir Alanna the Lioness, as she stands on the brink of adulthood. Aly has little in common with her mother and much prefers her father's spywork, but both her parents refuse her numerous requests to become a field agent because it's such a dangerous job. After taking a trip to get away from the latest argument, Aly is captured by slavers and taken to the Copper Isles, one of Tortall's historic enemies. Turns out Kyprioth the Trickster God has selected her as one of his instruments to take back the Isles from the white luarin conquerers who subjugated and enslaved the dark-skinned raka. Kyprioth makes a wager with Aly: if she can keep the children of the disgraced Balitang family alive through the summer, he will convince her father to let her spy. This is harder than it seems when one of them is Sarai, the "twice-royal" lady who is prophesied to become Queen and reclaim the Isles, but Aly agrees to become the god's chosen and lend him her extensive skill in spying and deception.

Characters can be found here.