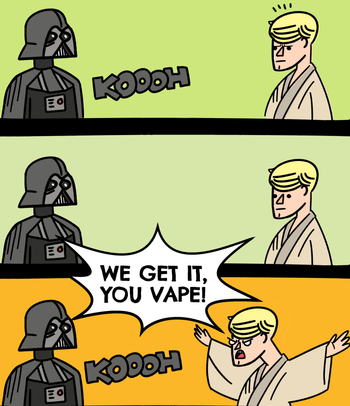 "Oh, boy. Here comes an evil asthmatic."
— Tom Servo on a scene from ''Being From Another Planet''.
Advertisement:

SSSHHH HOHHHHHH... There is something particularly creepy about wheezy or labored breathing. ...SSSSHHHHH Unnatural breathing can characterize someone as being...HOHHHHHHH unnatural, or less than human. As a result, ...SSSSHHSH this sort of breathing is often given to ...HOHHHHHHHHHHHHH evil characters. This has been particularly true since 1977, when the Trope Namer Darth Vader first appeared in film. Ideally, the creepy breathing is combined with some sort of ...HOHHHHHHH creepy voice, and an Evil Laugh cough. Sometimes the creepy breathing is justified by some sort of disfiguring accident, which gives the evil character a creepy appearance as well.

The very first onscreen appearance of the iconic Darth Vader and his trademark breathing sound.

The very first onscreen appearance of the iconic Darth Vader and his trademark breathing sound.