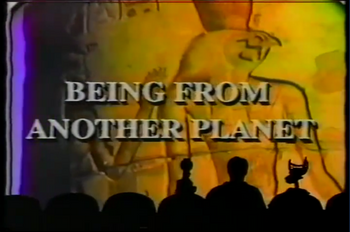 You know, being from another planet I didn't have a lot to do with this film.

Film Watched: Time Walker aka Being From Another Planet.

The first MST film to feature actor Ben Murphy, who would later appear in a later episode, Riding with Death.

The episode can be streamed here

This episode has examples of:

Serrano: (holds his hand and screams in pain.)