Film / The Castle of Fu Manchu 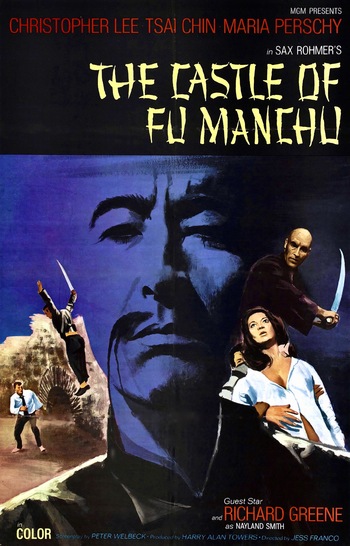 The Castle of Fu Manchu (1969), directed by Jess Franco, is the fifth and final installment of the Fu Manchu series starring Christopher Lee in the role.

The plot attempts to emulate a James Bond movie, with its titular diabolical villain planning to freeze the oceans of the world by using a special opium-based formula. Fu Manchu has imprisoned a scientist to assist him, but the man requires a heart transplant (something which was still very new when this movie was made), so Fu Manchu kidnaps a doctor and his nurse to ensure his hostage stays alive. As the evil mastermind works on his plans, Interpol and his arch-nemesis Nayland Smith aim to find out where he is located and stop him.