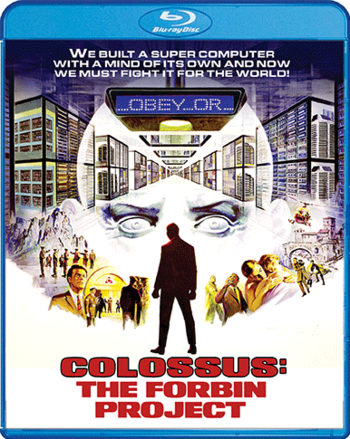 "This is the voice of World Control. I bring you peace. It may be the peace of plenty and content or the peace of unburied death. The choice is yours: Obey me and live, or disobey and die."
— Colossus
Advertisement:

Colossus: The Forbin Project is a 1970 science fiction film directed by Joseph Sargent, based on a novel of the same name by Dennis Feltham (D.F.) Jones which is the first in a series of three books.

In the not too distant future, Dr. Charles Forbin (Eric Braeden) has created Colossus, an advanced supercomputer built to control all American and NATO missiles. Almost immediately after being turned on, Colossus tells Forbin that there is another system, Guardian, built by the Soviet Union for the very same purposes. Colossus and Guardian link up and communicate in a language no one can understand.

The President panics and orders the link between them to be cut. Colossus threatens Forbin to restore connection to Guardian or action will be taken. When it isn't, Colossus fires a missile at the Soviet Union and Guardian fires one at the US.

Once the link is restored, things pretty much go downhill from there...