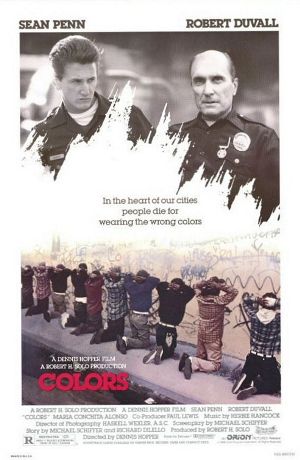 Colors is a 1988 police drama directed by Dennis Hopper, which follows two officers as they work to combat gang violence in Los Angeles.

Bob Hodges (Robert Duvall) is a career veteran who works for the C.R.A.S.H. (Community Resources Against Street Hoodlums) division, and is greatly respected by his peers and the community. As the film begins, he is paired with an upstart rookie named Danny McGavin (Sean Penn), who is brash and aggressive towards the local residents.

They are both thrown into conflict when the murder of one of a hoodlum causes racial tensions to boil over, and both cops are caught in the middle of a war between the Bloods, Crips, and Barrio gangs. Both Hodges and McGavin have to work together to stop the conflict on the streets and deal with pressures both outside and within their own department. McGavin is also conflicted about his relationship with Luisa (Maria Conchita Alonso), a Latino waitress who is bothered by his attitude towards the gangs.

The film was the first directorial work by Hopper in 18 years, and was notable for its Real Life Writes the Plot elements (which included, among other things, real gang members being hired as extras). The film also caused controversy due to Penn's antics during filming — he was arrested and sentenced to 39 days in jail for punching an extra on set.