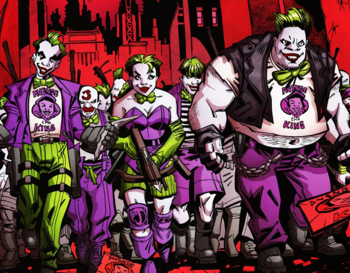 Gang dress code is no joking matter.
"Also, what kind of a city is held hostage by disco roller skaters? The people in that town are such pussies that their water faucets are labelled 'Breast Milk' and 'Massengil.'"
— Seanbaby "The 6 Craziest Villains Ever Defeated by Snack Cakes"

A gang or group of people who possess some sort of specific gimmick that sets them apart from the other gangs.

Gang differentiation is pretty necessary if you've got inter-gang politics. Otherwise you've just got some guys beating up some other guys. The most simple (and realistic) might be a color scheme (the blue Crips vs. the red Bloods) or lifestyle group (Mods vs Rockers), but TV and video games often take this to ridiculous lengths, dressing in totally ridiculous outfits, or only using a specific weapon.

Occasionally, a Fictional Political Party can have a theme resembling this.

Compare Planet of Hats (where it's more than just criminals looking this way), Group-Identifying Feature (with which this may overlap) and Carnival of Killers (where the gangsters are not working together, and might even be in open competition). Not related to Gang of Critters. Incredibly, sometimes Truth in Television.