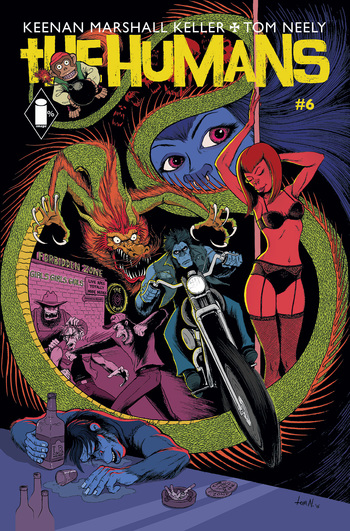 The Humans is a Image Comics limited series, written by Keenan Marshall Keller, and illustrated by Tom Neely.

It takes place In a World… where apes and monkeys are a the dominant species, and humans are treated as pets, beasts of burden or something similar. Outside that fact, it's exactly like our Earth in The '70s.

The titular humans aren't actual humans (those are usually Living Props), but rather a biker gang who chose that moniker to present themselves as wild and violent. The series follows the bikers' conflicts with the law, rival gangs and a few Corrupt Corporate Executives who like to walk on the wrong track sometimes. It also centers on gang members' personal lives, particularly leader Tommy and his brother Johnny, a Shell-Shocked Veteran who just returned from a tour of duty in Vietnam.

It's basically an homage to Planet of the Apes and 1970s biker culture, but it can get pretty freaky and violent sometimes.