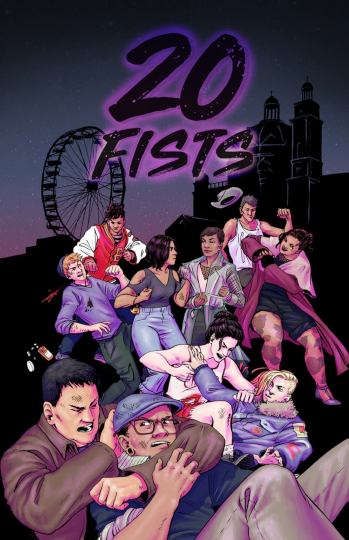 20 Fists is an independently-published 2019 action/romance comic book, presented in black-and white. It is written by Frankee White and illustrated by Kat Baumann, with letters by DC Hopkins.

In a nameless American city, various crews compete in a loose underground fighting organization known as the 20 Fists Fight League. There are three rules: Five members to a team. No cops. And no killing. Teams can duke it out anywhere that's not neutral ground.

The Big Jackets are the top dogs in this league, and are bitter rivals with newcomer gang The No Names. However, their respective leaders, Billie and Chel, fall in love during one of their numerous epic brawls, with all the obvious complications that arise from such a situation. On the eve of yet another battle, the two lovers must make a decision about their future.

Described as "a queer Romeo & Juliet meets The Warriors," the three-issue story is structured into five chapters: three "Rounds" of the present story involving the big fight, and two "Interludes" detailing more about the gangs and the relationship between Chel and Billie.