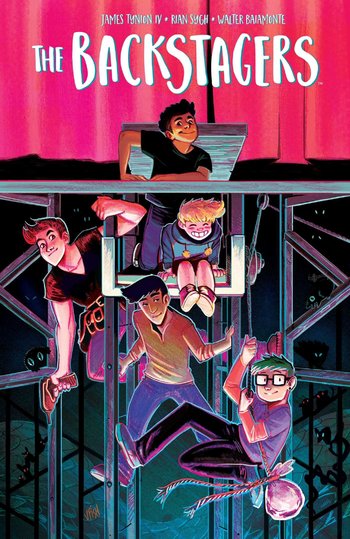 Rebels Without Applause
The Backstagers is a comic published by Boom Studios (under the Boom! Box label). It is written by James Tynion IV (writer of The Woods and Detective Comics (Rebirth)), and primarily illustrated by Rian Sygh.
Advertisement:

When Jory transfers to the private, all-boys school St. Genesius, he figures joining the stage crew would involve a lot of just fetching props and getting splinters. To his pleasant surprise, he discovers there’s a door backstage that leads to different worlds, and all of the stagehands know about it! All the world’s a stage…but what happens behind the curtain is pure magic!

The comic ran between 2016 and 2017, and consists of eight issues (labeled Acts), broken into two trade volumes of four. There were holiday special comics released for Valentine's Day and Halloween (collected in a third trade volume), along with a 3-book middle grade prose novels that consists of:

See Lumberjanes, this book's Distaff Counterpart, which is an also all-ages book that highlights young LGBT characters and their relationships.