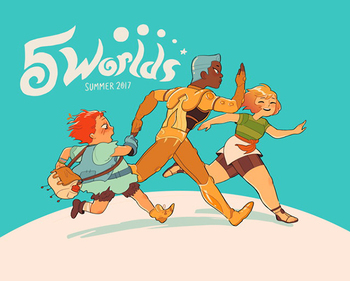 From Left to Right: An Izu,Jax,& Oona

5 Worlds is a sci-fi/fantasy graphic novel series written and illustrated by Mark Siegel and Alexis Siegel and with their collaborators, Xanthe Bouma, Matt Rockefeller, and Boya Sun.

Three unlikely heroes, Oona, An student at the Sand Dancer Academy, is a fighter with a huge destiny on her shoulders, An Izu, A poor but streetsmart boy, and Jax Amboy, A star athlete is beloved by many across the galaxy are brought together in war with their 5 planets are overheating unless five ancient and mysterious beacons are lit by a skilled Sand Dancer.

The series has 3 installments currently and is planned to be a five-part series:

Tropes found in 5 Worlds and it's installments:

' consisting of a Blue Skin,A Plant Person,A Shapeshifter and a junkie mechanic.