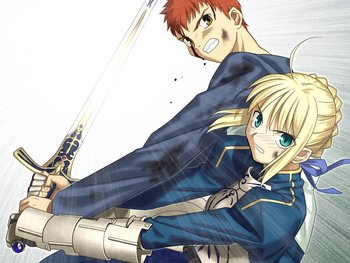 The couple that slays together, stays together.
"Well, I was hoping that our relationship would be a long and happy one, but I suppose I'm willing to settle for short and exciting."
— Odo, Star Trek: Deep Space Nine, "Shadows and Symbols"

This is the kind of couple where bullets figure prominently in the story of their romance. Where "war buddy" and "significant other" are synonyms. If you harm either one of them, the survivor will kill you as surely as the sun rises. Their mere presence increases the chance of a Back-to-Back Badasses scene to nearly 100%. They may also bicker or flirt in the middle of a fight, much to the confusion or consternation of their opponents. They tend to be extremely resistant to breakup since their bond was forged in combat, so if they're married, they're Happily Married. In fantasy settings, they'll probably manifest as Sword and Sorcerer. If they have gone all the way, expect them to engage in a lot of Glad-to-Be-Alive Sex. It's also possible they may get it on before the fighting. Add a kid or two for a Badass Family with a Mama Bear and a Papa Wolf.

In Real Life, it's also the same as above — and often, they're officers. There are laws in some areas against this sort of thing if one outranks the other to prevent the superior from forcing the under-ranked into it.

See Adventure Duo, Bash Brothers, Sibling Team, and Fire-Forged Friends for other, not necessarily romantic forms of this trope. If they're criminals, they're an Outlaw Couple. If they are royalty who do this as one of their jobs, they are also a Ruling Couple. If they're villains, they live in Unholy Matrimony. Absolutely no relation whatsoever to this classic board game.