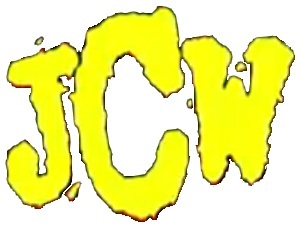 Shaggy 2 Dope: All we're saying is we own the federation. That's all we're saying.
Violent J: That's right, so everything goes our way. And if you don't like it, fuck you. So, what you gonna do when the Insane Clown Posse runs wild on you, mother facko?
—Juggalo Championshxt Wrestling Volume 1
Advertisement:

Unlike most wrestling videos where the announce team is positioned at a desk near the ring calling the action in a usually straight-faced manner as it happens, the JCW DVD's have hilarious, Genre Savvy commentary that is added on after. Not as an alternate commentary track, as the only commentary track. The three DVD's are hosted by "Diamond Donovan '3D' Douglas" (Violent J) and "Handsome Harley 'Gweedo' Guestello" (Shaggy 2 Dope,) with "'Luscious' Johnny Stark" (Jamie Madrox from Twiztid) joining in on Volume 1, and Psychopathic Records employee the Rude Boy commenting on his own matches on the first two and as a full-fledged third member on the third DVD. This commentary allows for a LOT of Kayfabe-breaking and Lampshade Hanging.

"The only tropes that just don't give a shxt!:"