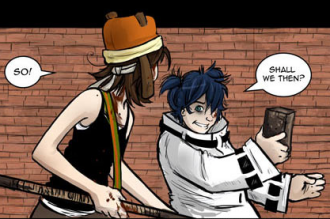 Jenny (left) and Sammie (right), about to kick some undead ass
"Years after the crippling outbreak that turned most of the human population into undead, a small community of survivors have taken up residence on an island, home to the abandoned facilities of the Argus Research Campus."
— LOG ENTRY #1536
Advertisement:

is a Science Fiction-Horror Webcomic by Jenny Romanchuk, that started running in late 2006, and went on indefinite hiatus in early 2018. Set in the years after the Zombie Apocalypse, it was originally conceived as a private self-insert comic for herself and friends, after they featured in a funny dream involving zombies, Romanchuk posted some strips online, then decided to expand on the concept when they were well-received. It can be read here.

The comic went on hiatus in early October 2015 due to issues in Romanchuk's personal life, with an update posted in late October 2016 saying Romanchuk was hoping to resume the comic in January 2017, but unfortunately the comeback was delayed. In early August of 2017, Romanchuk posted

that the comic would resume "sometime in October", with the comeback happening (very appropriately) on Halloween (October 31).

As of March 5, 2018, the comic is on indefinite hiatus, with Romanchuk tweeting on March 19

that she was unfortunately suffering from a flareup of anxiety and depression, and didn't know when or if she would be able to update the comic again.

The story centers on a motley but seasoned crew of young, government-sponsored Disaster Scavengers, (the eponymous "Zombie Hunters") all carrier Zombie Infectees dividing their time between coping with their expendable, segregated status at home, and trying not to get bitten in the wastelands filled with multiple "species" of zombies. When not fighting for their lives, searching for salvage or Plundering, they're training in New Meat, among them a half-zombie who chafes as much at having to work with his juniors as he does at their treatment of him. Alongside all this, A.R.C doctors and scientists keep working to Find the Cure! for The Virus, engineers keep technology running, Red Halos keep order, and ordinary civilians go about their lives.

It all sounds perfectly reasonable and civilized. It isn't.

The comic is rated R for violence, disturbing images, coarse language, and the occasional zomboobie.

Show your best sides at the same time! Spine Removal!