Monster and the Maiden 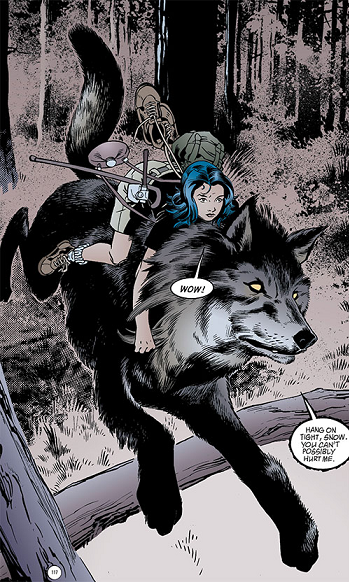 She's (usually) a human. He's anything else. Together, they work to achieve common goals.
Advertisement:

She's often a mage, summoner, warrior, adventurer, detective or just an unfortunate average girl who got mixed up in an unusual situation. She will most likely be a human, but can be anything human-adjacent (for example, she might be an elf mage who entered a pact with a demon in a universe that has elves and humans living side-by-side.). Often times she's a skilled fighter, or at least capable of protecting herself, but it's also possible that she never had to fight anyone in her life. If she's not that good in a fight, she still often has other skills she can utilize, like intelligence, street smarts, charisma or empathy.

He's most commonly a demon, ghost, beast or other supernatural creature like a vampire, but sci-fi works might feature an android, an AI or an alien. It's possible that he used to be human, but isn't anymore due to different circumstances. He also needs to be sapient - something like a female handler with a male Attack Animal isn't this trope. He doesn't need to be strictly a man, but needs to have a masculine presentation (like an android who has a masculine voice and name). It's worth noting that "monster" is used here in the broad way meaning "other", and has nothing to do with the "monster's" appearance (which can range from clearly inhuman to near-indistinguishable, like in case of a ghost or a highly-realistic android) or personality/behavior (from an aggresive berserker to a proper gentleman).

Together, they work with each other to achieve some kind of a goal, noble or otherwise. This can be anything from winning combat tournaments, adventuring, solving mysteries, planning to take over the world or protecting it, to something as mundane as running the local inn, travelling with their wares or conning people out of spare change. Their dynamic can range from anything between Platonic Life-Partners to Snark-to-Snark Combat (or both at once) to even Teeth-Clenched Teamwork, they just can't be openly antagonistic and working against each other. Their partnership might be due to a deep bond between them, a strictly business relationship of convenience or unfortunate circumstances bringing them together, with the two trying to find a way to get out of their situation. Sometimes they might openly be in a romantic relationship, but platonic partnerships (often with heavy doses of Ship Tease) are more common. They usually see each other as even, and the matter of their differences doesn't really come up that often (though it's possible she thinks that Freaky Is Cool).

Their skillsets and abilities often complement each other, allowing them to achieve things that would be impossible if they were by themselves: A ghost can't interact with the physical world, but he can give her advice, phase through walls or possess others. She might channel a demon for a strength boost in hand-to-hand combat or spells. A beast might protect her from physical threats, while she handles the diplomacy or is the brains of the operation.

Most of these duos work on the basis of contrast - women tend to be associated with gentleness and beauty, so pairing up a human woman with a non-human man, who often looks or behaves abnormally is interesting visually and/or dynamic-wise. In most modern works, she tends to be just as capable as he is, or at least has a different skillset she can use to not leave her completely helpless if he's not around. It's worth mentioning that while in most cases the "monster" will be the more physically stronger and imposing, this isn't a rule. An example like a human woman bodyguarding a frail, male alien also fits under this trope (though these examples are few and far between).

Compare A Girl and Her X and Symbiotic Possession. Contrast Demonic Possession, which is usually done without consent and with malicious intent. Sometimes related to You Sexy Beast. If they're in a romantic relationship, but don't work together, that's Beast and Beauty (a specific dynamic) or Interspecies Romance (more broad category). Death and the Maiden is a popular visual motif that portrays the personification of death with a young woman.