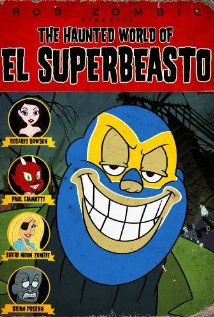 "Mr. Rob Zombie feels it would be a little unkind to present this picture without just a word of friendly warning. We are about to unfold the story of El Superbeasto, a man of action. It is one of the strangest tales ever told. I think it will thrill you. It may shock you. It might even horrify you. So if any of you feel that you do not care to subject your nerves to such a strain, now's your chance to, uh— Well, we warned you."
Advertisement:

The Haunted World of El Superbeasto is a 2009 animated horror comedy film by Rob Zombie, based upon the comic book series also created by him.

Marred by a case of Development Hell (it was supposed to come out in May '07), El Superbeasto owes a lot to series like Scooby-Doo and The Ren & Stimpy Show, with a lot more violence and many sexual elements and innuendo added, and therefore it's absolutely no children's cartoon.

The Haunted World of El Superbeasto provides examples of: