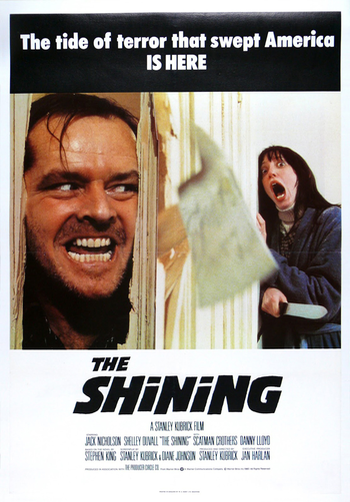 "HERE'S JOHNNY!"
Danny: Dad?
Jack: What?
Danny: You wouldn't ever hurt Mommy or me, would you?
Jack: ...What do you mean?
Advertisement:

The Shining is a 1980 horror film loosely based on Stephen King's novel of the same name. It was directed by Stanley Kubrick and starred Jack Nicholson and Shelley Duvall. Kubrick's collaborator Wendy Carlos returned for the score after A Clockwork Orange, co-composing with Rachel Elkind, although most of their work wasn't retained by Kubrick in the end.

Jack Torrance (Nicholson) is a recovering alcoholic writer who takes a job as the winter caretaker for the old and luxurious Overlook Hotel, which every winter becomes completely snowed in. He brings along his wife Wendy (Duvall) and son Danny (Danny Lloyd), hoping to make amends with them after accidentally dislocating Danny's arm while drunk not too long ago.

As time passes, strange things start happening: Danny discovers he has psychic powers and starts receiving disturbing visions, and Jack shows signs of increasing instability. He had been warned that the previous caretaker snapped and killed his family, but that wouldn't happen again... right?

Compared to the novel, the film is much more minimalist in its storytelling approach. Most aspects carried over from the original book are stripped down to their bare essentials, not only resulting in a radically different kind of story than what King wrote, but creating a persistently unsettling atmosphere, as very little is explained.

Although it achieved decent commercial success at the box office, the film was seen as a critical disappointment at the time of its release in 1980, with its most notable detractor being Stephen King himself, who hated it for the numerous alterations and creative liberties Kubrick took with the film compared to the events of the novel, to the point that he would choose to write and produce his own more faithful adaptation of the book as a TV miniseries in 1997. However, these days, The Shining is near-universally regarded as a masterwork of horror cinema, and one of the most influential, widely discussed, and widely referenced films the genre has ever seen. Even King himself would eventually come around to regard Kubrick's film as good on its own merits, but would still consider it a poor adaptation of his book, a consensus generally shared by King fans and Kubrick fans alike.

In a serious case of either Tempting Fate or Paranoia Fuel, The Shining is screened every year at midwinter for those "wintering-over" at the Amundsen-Scott South Pole Station, alongside The Thing. The Stanley Hotel in Colorado

— which inspired King's novel — has a channel on their cable TV that plays the film twenty-four hours a day.

Some interpretations of the film's themes are explored in the Documentary, Room 237.

After nearly 39 years, this film received a direct sequel in the form of Doctor Sleep.

Not to be confused with the Shining Series of video games.

"Midnight with the stars and you..."
Feedback

The Shining (1980) - The iconic scene of Danny riding through the hotel on his tricycle and encountering the ghosts of the O'Grady twins who wish for him to play with them ''forever''.

Example of:
"Join Us" Drone

The Shining (1980) - The iconic scene of Danny riding through the hotel on his tricycle and encountering the ghosts of the O'Grady twins who wish for him to play with them ''forever''.