Film / She Shall Have Music 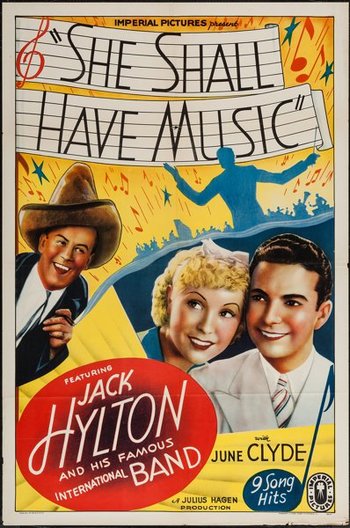 She Shall Have Music is a British romantic musical comedy made in 1935, mostly as a film vehicle for bandleader Jack Hylton (the British equivalent of Paul Whiteman), featuring American actress/singer June Clyde as the leading lady, Brian Lawrance as her romantic lead and Claude Dampier as an eccentric inventor.

The plot (if you can call it that way) has Hylton's band touring around Europe before boarding a cruise, where they will broadcast from the sea. The owner's son becomes infatuated by Jack's new singer, but becomes repulsed when he finds out she's part of a jazz band. The cruise is then shangaied in an attempt to get Hylton to broadcast aboard another ship.

This film was part of a number of cheaply-made musicals made by British studios during the 1930s in response to Hollywood material, often starring bandleaders such as Henry Hall, (Bert) Ambrose and even American jack-of-all-trades Charles "Buddy" Rogers. However, She Shall Have Music was the only one the achieve success across the Atlantic, coinciding with Hylton's brief stint in the U.S.