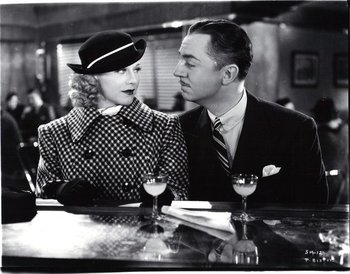 Star of Midnight is a 1935 film directed by Stephen Roberts.

Clay Dalzell aka "Dal" (William Powell) is a wealthy New York City lawyer, whose life is so awesome that his biggest problem is young, gorgeous Donna Mantin (Ginger Rogers) pestering him to marry her. Into Dal's cozy existence comes old friend Tim Winthrop. A year ago, in Chicago, Tim fell in love with a woman named Alice, but Alice rather abruptly disappeared, leaving Tim with only a goodbye note. Tim is still looking for her, has a hunch that she's in New York, and hopes that Dal can help him.

Dal and Donna and Tim go see a musical show, "Midnight", starring a mysterious actress named Mary Smith who insists on wearing a mask. Mask or no mask, Tim recognizes his Alice, but Alice/Mary flees the theater after he calls out to her from the audience. Back in his swanky penthouse, Dal is approached by gossip columnist Tommy Tennant, who knows some things about the elusive Mary Smith and wants to get more details from Dal. Right as he's about to spill some secrets, Tennant is shot and killed by an intruder. With the police suspicious of him, Dal is left to find out the real killer.