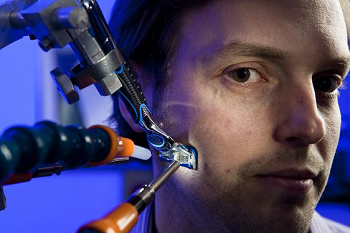 Two men in white lab coats walk in holding two containers that glow in different colours and put them into what appears to be a small particle accelerator. The energies from the containers collide, and form the scientific breakthrough of the century: A Razor With FIVE Blades!

In the world of commercials, shaving equipment is right there next to rocket science. Common imagery includes fighter jets and sports cars. Often an adoring woman will walk on screen to stroke or kiss the smooth chin.

That, or it just features a whole ton of blades.

Gillette are now actually advertising their products as "born from the science of shaving" (at least in the UK).

Other shaving companies like Harry's are bucking this trend, going for a more retro luxury style. (They still have 5 blades, however.)