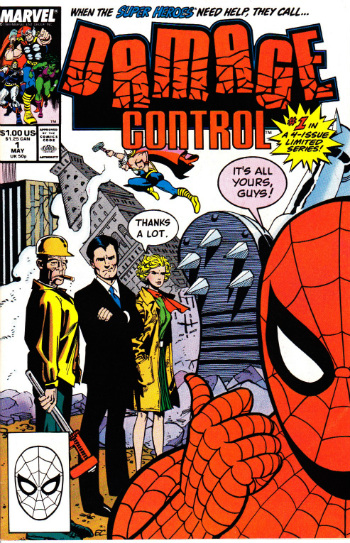 Damage Control is a comic (in both senses) series published in intermittent bursts by Marvel Comics. Created by Dwayne McDuffie, it offers a lighthearted look at the Marvel Universe through the lens of a company specializing in rebuilding areas devastated by superhero-supervillain throw-downs. Hilarity Ensues when abandoned bits of Applied Phlebotinum are picked up, superweapons are accidentally activated, and super-villains won't pay their bills.
Advertisement:

The core characters are:

Given the unusual situations they face, the regulars at Damage Control often need to be a bit... creative in how they resolve problems.

In October 2015, it was announced that a television series based on the comic book was in development at ABC by Ben Karlin (Modern Family), as a part of the Marvel Cinematic Universe. While it was initially intended to release in 2016 or 2017, the project was placed in Development Hell due to the network re-evaluating its commitment to creating Marvel television shows. Damage Control ultimately made their first official MCU appearance in Spider-Man: Homecoming as a federal agency funded in part by Tony Stark, led by Hoag (portrayed by Tyne Daly).

If you're looking for the trope of the same name, please go here.