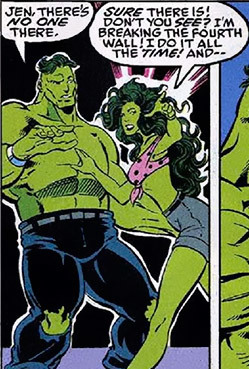 Abed: Shirley, would you like to spin off with me? I'm just riffing here, but maybe we could open a hair salon.
Shirley: I don't understand, Abed. Is this you being "meta"?
— Community

The Fourth Wall can be a fragile thing, but some are more fragile than others. Oft times, it stands just outside the sight of the characters, completely unnoticed, even though we all know it's there. But sometimes, even when everyone else can't see, there's one character who notices that there happens to be a script, or that someone's watching them, or that they're living life on a set.

As you can probably guess, this trope is about that one guy in the group who knows his life takes place behind a TV screen, knows that he's being written by someone, or can see the little effects that happen all around him. Usually, his friends dismiss him as being completely off his rocker, though to be fair he probably is.

Compare Meta Guy, who is the stage below this: completely Genre Savvy, but not necessarily knowledgeable of the Fourth Wall. Reading Ahead in the Script is a step up, where the meta character has real knowledge of the future due to their awareness of the medium. If several characters are fully aware of their fictional status and make regular reference to this fact, you've got a case of No Fourth Wall.

Audience? What Audience? is a related trope when one character breaks the fourth, but the other doesn't understand it. Also compare Red Pill, Blue Pill.

Huey realizes he and his family are in a show after noticing the audience's laughter, the Ottoman Empire ad and the blank pages of the Guidebook prop.

Huey realizes he and his family are in a show after noticing the audience's laughter, the Ottoman Empire ad and the blank pages of the Guidebook prop.