Radio / The Burns and Allen Show 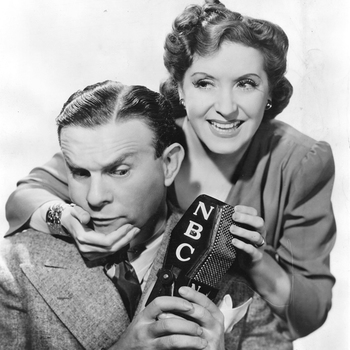 One of the defining series of the nascent medium of television, this Sitcom/DomCom debuted in 1950 when it was transferred from CBS Radio to CBS Television. The main setting of the series was the Beverly Hills home of comedians George Burns and Gracie Allen, who stared as versions of themselves. The main supporting characters in the series were their next-door neighbors, Blanche and Harry Morton; the show's announcers, Bill Goodwin (first season) and Harry Von Zell (subsequent seasons, 1951-58); and their real-life adopted son, Ronnie.

Burns and Allen had been a comedy team since 1922, in the waning days of vaudeville. Their act was fairly simple. George, the straight man, would ask Gracie a question. Gracie, who was one of the best practitioners of Irish bull

in show business history, would give a rambling, mind-twisting answer that could only be described as "illogical logic." George would then calmly ask for clarification, and Gracie would go off on another riff.

In the 1930s and 40s, they made several feature films and short subjects, but focused mainly on their radio series. During their sixteen years on radio, their characters evolved from a flighty dating couple (although they had married in 1926) to a solid married couple by the time the TV series was in development in 1949. The radio series had also expanded their characters' world. No longer was it just the two of them talking to each other. They began interacting with other characters. This was important because, as their characters matured, it seemed that George was the only one capable of following Gracie's train of thought. This eventually limited the impact of their routines.

In a typical radio episode, Gracie sent George to the post office to mail a very heavy package. George got bumped out of line several times and ended up having to go to the back of the line each time. After a few hours, he finally mailed the package. When he got home, he found out that the package was actually a box of rocks. Gracie was sending them to a neighbor who was building a rock garden. A neighbor whom Gracie had talked to while George was at the post office.

In a famous stunt on their radio series, Gracie ran for president in 1940 on the "Surprise Party" ticket, predating by 28 years the run made by Pat Paulson of the Smothers Brothers Comedy Hour.

As popular and well-written as the radio series was, their comedy routines were improved by the addition of video. Although Burns and Allen were not physical comedians, there was something wonderful about seeing the placid, patient look on George's face as he listened to one of Gracie's spiels; Gracie's wide-eyed, full-throttle intensity; the worried expression on Blanche's face with regards to Gracie; Harry Morton's annoyance with everyone, especially Gracie; and Harry Von Zell's befuddlement in general.

And with the transition to TV came the leap from mere absurdist humor to the occasional all-out foray into Surrealism. Where else could you hear one character ask why some situation was occurring, only to be told by George that that was all the writers could come up with that week? Or see a character change actors in the middle of a scene? (Although Roseanne came close with the two Beckys.)

The series ended in 1958 when Gracie was weakened after having a couple of mild heart attacks. She died six years later at the age of 69. (In a footnote that seems typical of this couple, Gracie's birth certificate had been lost in the San Francisco earthquake of 1906. People thought she was younger than George, but the 1900 U.S. Census data showed that she was actually six months older.)

When asked in an interview what the secret of her character was, Gracie said that her character thoroughly believed that she was the smart one and that it was everybody else who was out of whack.

See also the 1929 short Lambchops, which features George and Gracie doing eight minutes of the kind of routine that eventually developed into this show.