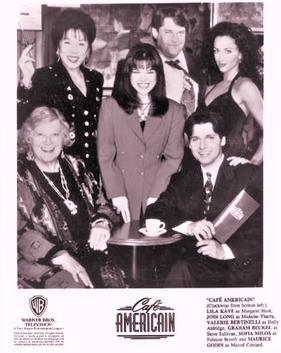 Café Americain was an American sitcom starring Valerie Bertinelli. Bertinelli played Holly Aldrige; a young American living on her own in France. Although she doesn't speak any of the language (which causes trouble for her frequently) she finds a job working as a waitress in a small cafe. At the cafe she meets a strange assortment of characters from around the world. These included Madame Ybarra, a former dictator's wife (a thinly veiled spoof of Imelda Marcos), and Fabiana Borelli, a tempestuous Italian model, and her perpetually jealous Italian lover Carlo. Holly became involved in a Will They or Won't They? relationship with Marcel, the cafe's owner.