Made from Real Girl Scouts 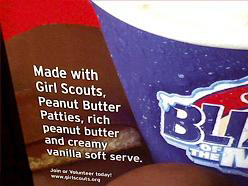 The comma strikes back!
Malcolm Tucker: Right, I'm off to deal with the fate of the planet. Be gentle with them.
Jamie MacDonald: Oh, you know me, Malc, kid gloves — but made from real kids.
— In the Loop
Advertisement:

Sometimes it really is Exactly What It Says on the Tin, only it really shouldn't be. This is when you find out that innocuously named product is in fact Powered by a Forsaken Child, or the strange man who just ordered a Black Russian in a bar is a vampire with very specific tastes. See also Human Resources. Most commonly played for horror or a kind of shock-comedy. The term comes from a children's joke popular around the girl scouts/bake sale/fund-raising circuit. Most famously referenced in The Addams Family.

A subtrope of Ambiguous Syntax. See also Having a Heart. For actual cannibalism, see I'm a Humanitarian. The title of To Serve Man invokes it, but is not related. A subtrope of Literal Metaphor.