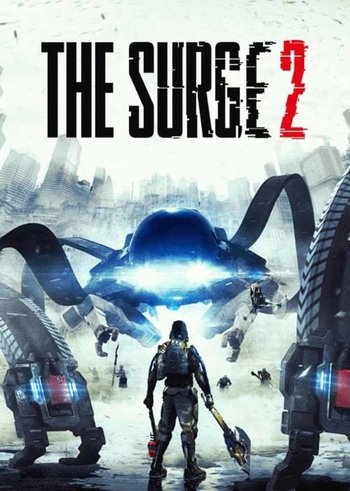 The 2019 follow-up to The Surge, developed by Deck13 and published by Focus Home Interactive.

On a first-class flight to Jericho City to discuss job options after being made redundant somehow (how exactly is up to the player), the plane mysteriously crashes. Two months later, you wake up in an infirmary bed... in prison, with the inmates running free and drones putting down anyone they come across. After obtaining your own exo-rig and escaping, the news isn't much better: The entire city's been locked down to prevent the spread of a nano-plague called Defrag. In the chaos, even skilled workers have been reduced to scavenging and killing others to get by, and a religion centered around the nanites named the Cult of the Spark has grown to dominate the city's inner workings. Your only clues to figuring out this mess are visions of a small girl named Athena, who may prove key to stopping the plague... or destroying all of humanity.

Much like the first game, the key mechanic is that every enemy you face can have their limbs severed to recover their equipment for yourself, while avoiding being destroyed by their own attacks. Survival means making full use of your abilities while keeping an eye on your surroundings to avoid getting overwhelmed.

Both free and paid DLC have been released for the game. Much of it includes new weapons and gear which must be obtained from newly-spawned enemies. A story DLC titled "The Kraken" was released on January 16, 2020, and has the player explore the VBS Krakow, an aircraft carrier that has been modified into a vacation spot for the rich. The security AI onboard has gone haywire, and it's up to you to find out why.

The Surge 2 contains examples of: