Forgot to Feed the Monster 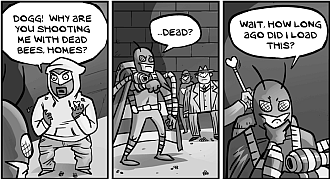 (Yes, that is a Bee-Bee Gun.)
Mr. Burns: This calls for the League of Evil! [opens sealed vault to reveal skeletons]
Mr. Burns: My league! My beautiful league! All dead.
Smithers: Even monsters need air, sir.
— The Simpsons
Advertisement:

In comedy works, it sometimes happens that a character will attempt to summon their minions, reveal a surprise character/animal/pet, or use a creature-based attack, only to have said minions/mooks/critters show up dead or incapacitated. Why? Because the character forgot to feed them or otherwise pay for their upkeep.

This trope is frequently a parody, is almost always Lampshaded, and is often used as a form of Deconstruction applied to other tropes, such as Zerg Rush, We Have Reserves, Summon Magic, and animal-based weapons or Death Traps such as Bee-Bee Gun or Shark Pool, particularly if the villain makes a point of starving them to "keep them hungry". When it happens, it's usually to the Miser Advisor, Jerkass, Cloudcuckoolander, or The Ditz characters, as they're presumably the kinds of people who would be too flaky or too cheap to feed the minions. The Butt-Monkey or Cosmic Plaything may also suffer this fate as a natural consequence of the universe screwing with them. When it happens to an Evil Overlord, it can be a result of incompetence on the part of the Minion with an F in Evil.

Compare It Works Better with Bullets, For Want of a Nail, and Surprisingly Realistic Outcome. Contrast Infinite Supplies, Offscreen Villain Dark Matter, Perpetual-Motion Monster. A good source of Mook Depletion. A subtrope and subversion of Crazy-Prepared.