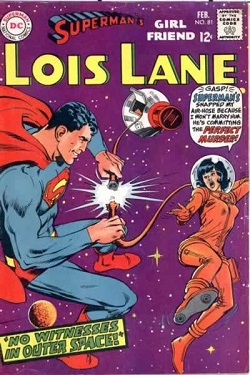 Asphyxiation is a brutal death, but Superman's too much of a dick to just kill Lois quickly.
Superman is a dick.
Advertisement:

Comic Books can be very, very strange sometimes. They can feature the hero acting like a jerk for no reason, endless sexual innuendo, extremely racist propaganda, monkeys, and stuff that's just plain weird.

Superdickery.com is a website dedicated to tracking down and documenting as many of these weird and wonderful comics as possible, often presenting them completely out of context, solely for the purposes of humor.

These comics are mostly from The Silver Age of Comic Books (although there are quite a few from more recent eras) and mainly from DC Comics, due to the many, many instances of Superman acting like a complete dick.

These are split into several categories:

The website is currently inactive, with it last being updated April 2019.

Has nothing to do with The Super Dictionary, although it did popularize the And That's Terrible meme.

Not to be confused with the trope Superdickery, which this website gave its name.