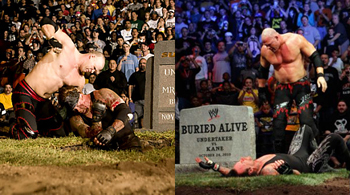 Kane buries The Undertaker in 2003 (left), Kane buries The Undertaker in 2010 (right). Note the different headstones in each photo.
Our audience is constantly renewing itself, The political times and the climate is changing. We're always aware that whoever our audience is now, it doesn't matter what matters we've told in the past—it's going to be fresh for them.
— Degrassi: Next Class co-creator Linda Schuyler

A gimmick or storyline may be reused freely and safely after a few years of dormancy.

The general principle applies to any work that is enough of a Long-Runner and/or has enough of a Fleeting Demographic to outlast most of its initial fanbase.

For example, during the Silver Age of comics, the writers assumed that their demographic was young boys ages 9-11 — which would make a three-year turnover safe — and that their demographic rarely read comics frequently enough to notice the repetition. They also believed that even if they did read them often, they wouldn't notice. This has been turned away from in recent times because comics are now written (and often read) by people who love continuity; if they make events repeat, then they'll eventually come up with a metaplot to explain it. Also, the rise of the Internet has made it trivial to compare works that are years or decades apart, making it practically impossible for writers to pull this off unnoticed.

This is also to be avoided if your franchise is subject to a Popularity Polynomial, as all the 'old' fans haven't actually left but are just waiting quietly for it to become cool again. As a result, they'll spot something overly-familiar.

Lampshading of this practice falls under Didn't We Use This Joke Already?.

Compare Recycled Script. Contrast Spiritual Successor where the writers don't have to pretend this isn't a rehash - because it isn't truly a rehash. May be implemented as a result of complaints about Continuity Lock-Out.

Alternative Title(s): No One Has A Memory Over Two Years Old, Nohamotyo, Seven Year Rule