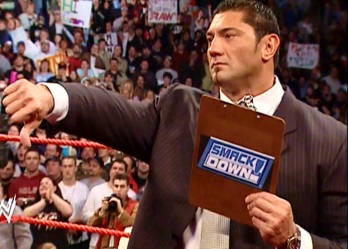 Dapper Dave does not approve.
Advertisement:

TROPER WE COMIN FOR U NIGGA!note that's not PG

Even the world of wrestling is not safe from memes, most of which were started either by WrestleCrap and their original Message Board (now the Freakin Awesome Network forums), their rivals over at 420chan's /wooo/, Botchamania, or r/SquaredCircle.

WWE has its own page.

open/close all folders
General
AEW
Advertisement:
AWA
NWA
All Japan / New Japan
WCW
FMW
Advertisement:
ECW
CZW
ROH
TNA
Sixty days later, "What's Fad Metamorphosis: Vocational Grappling doing in the iMPACT! Zone?"Explanation Refers to how most people who were fired from WWE jumped ship to TNA after the expiration of a "no-compete" clause. The wrestlers would usually take a Captain Ersatz of their WWE name due to copyright reasons.

One week later, Fad Metamorphisis: Vocational Grappling: *insert gratuitous anti-WWE rant here*Explanation TNA has a de facto rule stating that, upon hiring, you must take a shot at WWE, whether or not it's deserved.