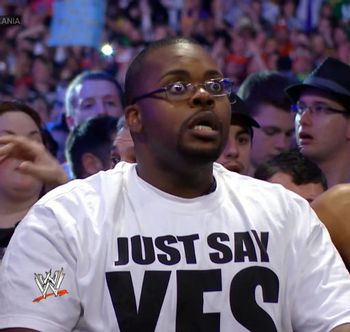 The expression that perfectly summed up the fan reaction to the Streak ending.
Return to Professional Wrestling
Advertisement:

The cameras pan over the crowd, highlighting the various signs and other things the fans brought from home. Then the camera zooms in on a sign stating, FOLEY IS GOD.Explanation Foley didn't like this, and said so in a promo, saying "Foley isn't God, but he's pretty damn good!" Fans eventually took the hint and changed their signs to "FOLEY IS GOOD"

Do you really think that this page is over?

IT DOESN'T MATTER WHAT YOU THINK!