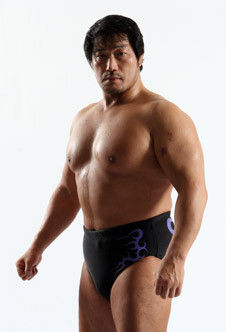 Who is Kenta Kobashi? Simply put, he is one of the greatest practitioners of puroresu in history.

Kenta Kobashi (Born 小橋 建太 on March 27th, 1967) started his career in All Japan Pro Wrestling in the early 90's by losing 63 matches in a row, all to establish him as the ultimate Determinator, showing plenty of fire, charisma, and fight in every one, until the day he finally won his first singles competition. He eventually rose to the main event and put on legendary bouts with longtime nemesis Mitsuharu Misawa, Akira Taue, and Toshiaki Kawada. And then he did it all again when he eventually moved to Pro Wrestling NOAH alongside his erstwhile friend Misawa. He is also the progenitor of the Burning Hammer finishing move, a Dangerous Forbidden Technique that is so well-protected and so infrequently used it became legendarily powerful, to the point that anyone who has tried it since him has only ever done it in the most dire of circumstances, and it's pretty much always finished the match. He's even said to have killed his own cancer with it.

Unfortunately, years of knee injuries began to take their toll on his body, and finally Kobashi announced his retirement in December 2012 — 25 years after his first match — before spending the next four months training just for his retirement match, which was held on May 11th, 2013. He's since been more of a supporting figure for his many proteges, as well as being a special guest of honor in NOAH and AJPW for special events.

Kobashi finished his career one of the most decorated and successful champions in Japanese wrestling history. Having won AJPW's Triple Crown World Championship three times, The AJPW world tag team championships six times with three different partners, and winner of the 2000 Champions Carnival. In NOAH, he only won the GHC World Heavyweight Championship once, but holds the record for longest reign (735 days), and the second-most successful defenses of said belt with 13. He was also a winner of the GHC Openweight Hardcore belt, and a 2-time winner of the GHC-Tag Team Championships, both with Tamon Honda. Outside of the ring, he was given plaudits by the Wrestling Observer Newsletter, Tokyo Sports, PWI, and Nikkan Sports, all of whom labelled him either "Wrestler of the year" note especially in 1996, where the Newsletter, Tokyo Sports, and Nikkan all uniformly awarded him the title, having participated in the Match of the Year, or awarding him five stars in many of his matches.

The following tropes are found in Kenta Kobashi: