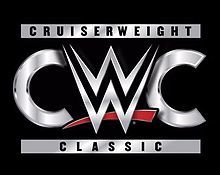 "This is going to be awesome!"
—Daniel Bryan
Advertisement:

The WWE Cruiserweight Classic, formerly the Global Cruiserweight Series, is a professional wrestling web television series and tournament produced by WWE with all participants billed at a weight of 205 lbs. or less. Tournament qualifying matches took place in various promotions of the independent circuit, including well known promotions such as Revolution Pro Wrestling, Progress Wrestling, and Evolve. Many cruiserweight wrestlers from around the world were given the chance to qualify for the 32-man tournament, the first three rounds were taped on June 23, July 13 and August 26, 2016. The semi-finals and final aired live on September 14, 2016, with Filipino-American T.J. Perkins emerging as the victor and the holder of the revived WWE Cruiserweight Title.