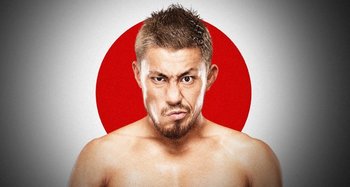 Before that, he wrestled for Dragon Gate, where he was an Open the Brave Gate, Open the Twin Gate, Open the Triangle Gate and Open the Owarai Gate champion and the winner of the 2011 and 2012 Summer Adventure Tag League. He also toured the US for a while and wrestled for other promotions, including Pro Wrestling Guerilla and CHIKARA.

In 2016, he signed on with WWE's cruiserweight division.