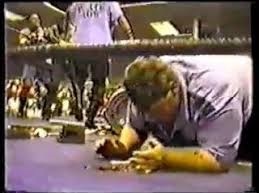 The Mass Transit Incident is one of the most infamous moments in ECW history. Unlike other moments, it started out rather mundane. The Gangstas (New Jack and Mustafa) were supposed to face D-Von Dudley and Axl Rotten, but Axl no-showed. Eric Kulas, a seventeen-year-old kid with zero experience, showed up, lying about his age and about having been "trained" by Killer Kowalski, and offered to take Axl's place. He was billed as Mass Transit, a wrestling bus driver based on Ralph Kramden from The Honeymooners.

According to New Jack's episode of Dark Side of the Ring, Kulas (who obviously lacked the knowledge of locker room etiquette) tried to lay out some of the match's progress (an action viewed as vastly overstepping his bounds), including suggesting that New Jack blade him. New Jack took offense to the jobber's impudence and took liberties that included slicing open his forehead with a scalpel and generally beating the hell out of him, prompting the quote above. This was, along with Raven's Nest crucifying The Sandman, one of the two debacles that nearly killed ECW's chances of getting on PPV.

New Jack was arrested at the time, but was ultimately let off when the court found out that Kulas had lied to Paul Heyman about his age and experience level.

There are conflicting stories about the incident, leading to a lot of contradictory facts coming from different sources (most notably, what age Kulas had lied about actually being, as well as what kind of blade New Jack used to cut him).

Kulas would later pass away on May 12, 2002 at just 22 years old due to complications from gastric bypass surgery.