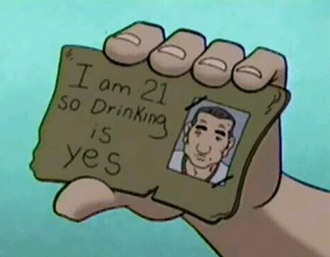 Yeah, that'll work.
Milhouse: Twenty five years old? You're not twenty five years old! This I.D. is completely fake!
Bart: Yes, you're right, Milhouse. It is a fake, which makes it a fake I.D.
— The Simpsons, "Bart on the Road"
Advertisement:

A minor obtains or produces a fake ID, most often a driver's license, to present themselves as a person who has reached the age of majority. This is usually done to purchase an age-restricted item, usually alcohol or tobacco. In older works, when information was more difficult to verify, they may even use it to enlist in the military.

In the early days, identification was nothing more than a laminated piece of card stock, which made forgery extremely easy. As many jurisdictions incorporate more sophisticated security features into their identification documents, they have become increasingly difficult to recreate. In these cases, it is more practical to steal a real ID from an older sibling or an Identical Stranger, or to apply for a real one under false pretenses.

If questioned, the imposter may rely on a Conveniently Unverifiable Cover Story. If the quality of the forgery is so low that it would never fool anyone, or if the holder makes no attempt to hide the fact that it is fake, see Badge Gag. Can result in a Cover Identity Anomaly. Expect to see a Master Forger making these. See also Totally 18.