Spoilers for all preceding Marvel Cinematic Universe movies, including Avengers: Infinity War and Avengers: Endgame, will be left unmarked. You Have Been Warned! 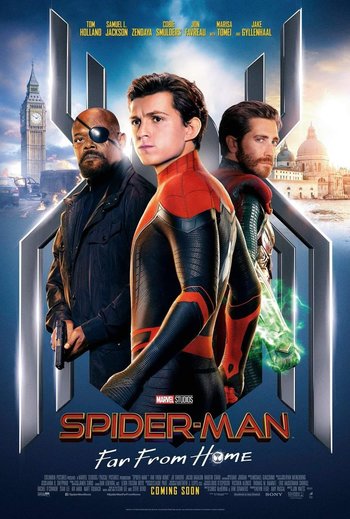 "Stark chose you. He made you an Avenger. I need that. The world needs that." note From left to right: Nick Fury, Spider-Man, and Mysterio.
"I don't think Tony would have done what he did if he didn't know you were going to be here after he was gone."
— Happy Hogan
Advertisement:

Spider-Man: Far From Home is a 2019 superhero film directed by Jon Watts, and the 23rd installment of the Marvel Cinematic Universe. A sequel to 2017's Spider-Man: Homecoming, it's also the eleventh and final film of the MCU's Phase 3 as well as the end of the 23-film Infinity Saga Myth Arc, a coda to the Infinity Saga’s climax in Avengers: Endgame, and the second co-production between Disney's Marvel Studios and Sony's Columbia Pictures division.note In the agreement between the two companies, Sony financially backs and receives all profits from all solo Spider-Man movies. Marvel, in return, retains full creative control and will keep the profits from any team-up films that the character of Spider-Man appears in. The movie is the second in the MCU Spider-Man Trilogy and the eighth Spider-Man movie in total, thanks to Spider-Man: Into the Spider-Verse releasing between this and Homecoming.

Set eight months after the events of Endgame as the world recovers from the actions of Thanos, Far From Home follows Peter Parker — better known as the crime-fighting hero Spider-Man — on a European class trip, hoping to catch a break from superheroics following the death of his former mentor Tony Stark, when he's unexpectedly forced into yet another colossal conflict, this time against interdimensional entities known as the Elementals. Aside from receiving backup help from Nick Fury and a resurgent S.H.I.E.L.D., Peter also gains the help of an unexpected ally: a man with supernatural abilities who goes by the name of Mysterio.

A direct sequel, entitled Spider-Man: No Way Home, was released in 2021.

open/close all folders
Tropes # to D
Tropes E to M
Tropes N to Z
"I faced a lot of deception. And I’m tired of the lies."
Feedback