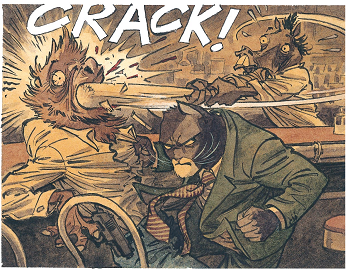 "When fighting angry blind men, best to just stay out of the way."
— Mr. Han, The Karate Kid (2010)
Advertisement:

A common trick when fighting a Giant Mook, but often seen elsewhere is to find a way to use their power against them. The simplest way to do this is using your own cunning and speed.

Deadly Dodging is a short term in-combat form of Batman Gambit. Arrange things so that the enemy attempts to hit you, but move at the last minute, causing them to hit whatever you conveniently arranged to be behind you.

While this is usually punches, it can be used on projectiles. Used frequently in kids cartoons to avoid having the heroes actually hit their opponents. In Video Games, this is a fairly common way to defeat the Puzzle Boss, often stretching credulity to the point of Boss Arena Idiocy. Even without Puzzle Bosses, this is also a favorite way of dealing with large numbers of Mooks. Some (usually older) games even allow enemies to begin infighting with each other when you do this properly.

Compare Wronski Feint, Door Judo, Dangerous Backswing. See also: Self-Damaging Attack Backfire, Hoist by His Own Petard, Karmic Death, Could Have Been Messy, Bullfight Boss, and Bulletproof Human Shield. Somewhat inverted by Exactly What I Aimed At, where this is making a foe's attack miss and do them harm, rather than you yourself deliberately missing to do another harm. If the opponent doesn't require any help hurting itself in combat, it falls in What the Fu Are You Doing?