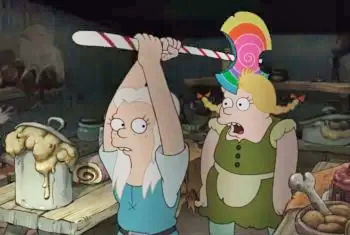 A combat move in which a heroic melee fighter, taking aim at an opponent in front of him, swings a large melee weapon over his head and—accidentally or maybe intentionally—hits an enemy standing behind him, taking him out. Usually this is followed by landing a hit on the enemy in front immediately afterwards (what the fighter wanted to do in the first place).

This comes in handy when the hero is outnumbered in a fight and the adversaries do not practice Mook Chivalry, or when a sneaky attacker is about to stab the hero In the Back while he is distracted by the enemy in front of him.

The Dangerous Backswing is not always lethal. Especially there is the comedy variant in which an overzealous fighter does not realize that his mighty swings pose a threat to his own allies standing behind him, and the very companions he means to protect only narrowly dodge possibly lethal hits or else collect some bumps to the head.

Overlaps with Badass Back. Compare Spin Attack, an alternative way to deal with such a situation. If the backswing hits an ally, it's a case of Friendly Fire. Collateral Damage is basically the missile weapon equivalent. Compare and contrast Offhand Backhand, where the character is perfectly aware of the person behind them and clobbers them without looking regardless of whether they are currently facing a threat frontal. Compare Plank Gag, Rod And Reel Repurposed and Deadly Dodging.