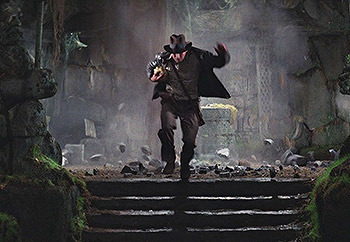 Inevitably, once the Big Bad (and sometimes even The Dragon) is defeated, his Supervillain Lair (castle, secret headquarters, cave, tower, etc.) will begin to destroy itself, triggering a Chase Scene where the heroes are chased out by the threat of falling rocks, timbers, masonry, etc. and whatever else is collapsing down upon them.

This may be due to a Self-Destruct Mechanism, or due to the lair having No Ontological Inertia. Alternately, the hero's goal may been to deliberately cause (read: destroy) the Collapsing Lair, like by setting off a Time Bomb or pushing the Big Red Button that is invariably linked to said Self-Destruct Mechanism. Or perhaps the combination of the Big Bad's No-Holds-Barred Beatdown and the hero's own Heroic Second Wind resulted in extensive damage to the lair's supports/foundations/reactors/munitions/whatever, and it was going to start coming down anyway (when this happens in Video Game form, we call it a Load-Bearing Boss). Sometimes the Big Bad will do this deliberately, in hopes of taking the hero with them. If this is done after a stealthy entry, this overlaps with Starts Stealthily, Ends Loudly.

Why is this useful, apart from topping the Final Battle with an exciting escape scene to safety (after which you can directly cut to the happy end celebrations)? Think about it. The Big Bad has had a massive base, with several valuable gadgets, and many remaining lesser minions. You definitely do not want to drag out the story by having the hero deal with them one by one too, much less to put his hands on something that could change the status quo. Better to just blow it all up. And best of all, once you do actually make it out alive, you get the immensely satisfying shot of the hero looking on as the Supervillain Lair goes bye-bye in spectacular fashion.

Often occurs after defeating the Monster of the Week or after setting a Catastrophic Countdown. See also Race Against the Clock if the hero has a set amount of time to get out before the thing completely caves in.

If it truly does become impossible to escape the Collapsing Lair, expect to see a Load-Bearing Hero save the day.

Rare in television except as the end of a Story Arc, because destroying sets is expensive: you just have to build new ones next week. In animation, however, it's easy. In video games (as already mentioned), this often happens because of a Load-Bearing Boss. Usually a result of Storming the Castle. If the villain's domain is an entire planet, see Earth-Shattering Kaboom.