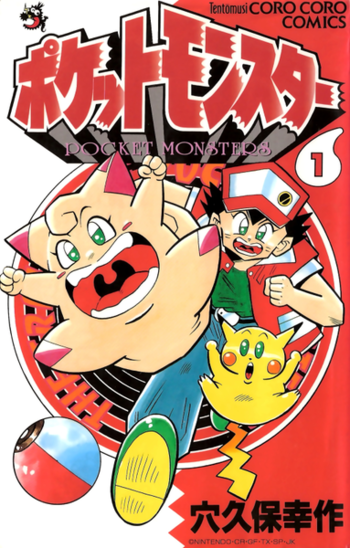 The second adaptation of Pokémonnote Often incorrectly thought of as the first adaptation due to the first being a 4koma that came out only one month beforehand. and the longest-running adaptation of the series, Pocket Monsters is a Slapstick manga by Kosaku Anakubo that originally only vaguely resembled the games it is based on.

It stars Isamu "Red" Akai, the first Pokemon protagonist, on his adventures around many regions. Unlike any of the official protagonists, he starts out with a Clefairy... aaaaaand it all goes downhill from there. While Red is pretty much the standard Pokémon Protagonist, Clefairy is a lazy bum who can't be arsed to know any actually useful moves.

Not long after, they find Clefairy's cousin Pikachu, who is smart and competent - and not even in comparison - and the trio is formed. They set out on the standard Pokémon Journey... while trying to stay one step ahead of the trouble Clefairy causes, sometimes through his own machinations, sometimes accidentally.

The manga is known for its odd art style, even odder comedy, the fact that Pokémon can evolve and devolve at will, and its overall different feel from other adaptations.