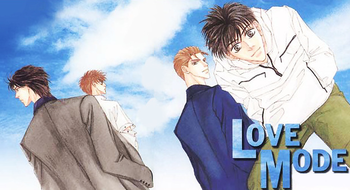 Love Mode is an eleven-volume Boys' Love manga series created by Shimizu Yuki, which was serialized in Magazine Be x Boy from 1995 to 2003.

It centers around the Aoe Family, primarily Aoe Reiji, who runs, among other things, a dating club for men. There is also an audio drama series of seven volumes, loosely covering the middle of the manga series. The storyline features many different couples.