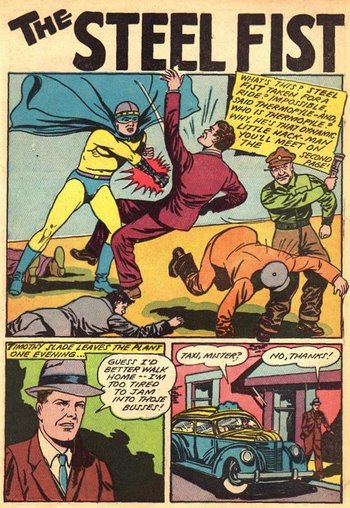 The Steel Fist is a Superhero from The Golden Age of Comic Books, created by H.C. Kiefer and published by Rural Home in Blue Circle Comics #1-5.

A factory is attacked by Nazis, and patriotic worker Timothy Slade tries to stop it. Unfortunately, the Nazis defeat him and put his hand in molten metal, damaging it so bad that it needed to be amputated. However, Lady Liberty herself took pity on Slade and healed his hand, making it hard as steel in the process. Now, Timothy Slade battles evil as the Steel Fist.