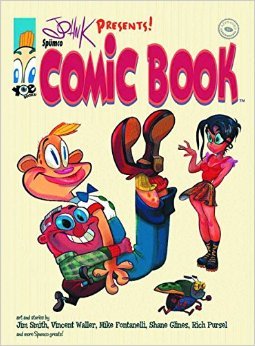 In Service To Mankind.
"It's called "Comic Book" and it's a cure to political correctness. There's this whole fucking Barbra Streisand movement to make people pretend they're not human; that they don't have human desires and they don't say human things in real life, and all it does is frustrate your natural urges. Eventually we're all going to become mass murderers. We're suppressing everything that comes natural to us. If there is any place where you should let out all of your frustrations, it's entertainment. Everybody has evil dirty thoughts. Most men love pretty girls; you're not supposed to love pretty girls anymore, which is like *insane.* If you hate all that stuff, you should buy our comic book. Our comic book is all about humanity. It's about the things that you really think about but you're afraid to say to anybody. It'll be in comic book stores and record stores. It's in color, but it's printed on crappy paper, like old comic books. It's not trying to be slick or anything."
—John Kricfalusi in an interview with Boing Boing

Spumco Comic Book is a short lived comic book series created by John Kricfalusi, published by Dark Horse Comics for the first three issues in 1995, and then one more issue by Marvel Comics in 1997. It starts his characters George Liquor (American), Jimmy The Idiot Boy and Sody Pop.

Despite having a great stable of cartoonists working on it, the comic failed to find an audience and sold poorly due to a catch 22 situation; at the time, comic book stores usually only attracted audiences of superhero comics, who simply weren't interested in the gag oriented stories, and they weren't able to get regular book stores to sell the comics instead, dooming the series to a meager four issue run.

The first issues of both the Dark Horse Run and the one issue Marvel run was later republished in hardcover by Yoe Books, complete with a previously unpublished story.