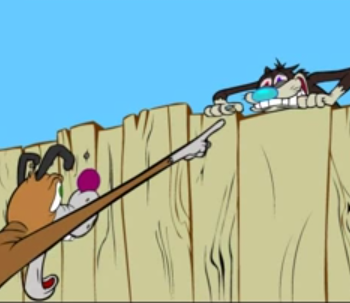 "That is it! I'm funny! But don't you dare laugh at me!"
"Weekend Pussy Hunt was a Film Noir cartoon. We serialized it so that every week there'd be a cliffhanger. Its style was a 1940s live-action film noir movie. and we based one of the characters, Dirty Dog, on one of my favorite movie actors, Robert Ryan. Weekend Pussy Hunt was basically a chase movie, a really dark hardboiled thriller. We started off fooling the audience. We wanted them to think it was like a 1940s Warner Brothers chase cartoon between a dog and a cat, but as we moved on, they got uglier and uglier and uglier. You found out more about who this dog was; he was the king of the underworld animals in the neighborhood. So it becomes this ugly dark film noir kind of a movie."
—John Kricfalusi, discussing the series in an interview for "TV Freak Feature"
Advertisement:

Weekend Pussy Hunt is an early web-only flash cartoon made during 1999 for Icebox.com (but was originally produced for MSN in 1997), created and directed by John Kricfalusi. Unlike John's previous flash cartoon, The Goddamn George Liquor Program, it has the distinction of being "the world's first interactive web-based cartoon".

The story is centered around the characters of Cigarettes the Cat (voiced by Eddie Fitzgerald) and Dirty Dog (voiced by John Kricfalusi). After briefly hanging around with George Liquor and Jimmy the Idiot Boy, Dirty is harassed by Cigarettes and his irritating laughter, prompting his wrath and a chase soon after. Cigarettes hides out with his pal Bugs Pussy in a trash can, but quickly learns from him that the dog he was just screwing around with has a much darker side to him than he anticipated, and that him annoying Dirty will have long-term repercussions...

As mentioned in the quote above, the series is a Affectionate Parody of 1940's Film Noir. As one would expect from John K's work, it features his trademark bizarre animation and over the top acting, gross out jokes and unique characters.

Unfortunately, the series was never finished; Icebox.com ran out of funding during production of episode 13, and the entire staff was laid off with four more episodes to go. The flash shorts were eventually taken down, but all of the existing episodes have been uploaded to Youtube

(but viewing them comes with a warning, as much of the content is decidedly NSFW).

Cigarettes the Cat would later appear in the music video for Weird Al's song "Close but No Cigar" and Cans Without Labels.